The Quechua language returned to Cornell’s curriculum this fall after a 15-year hiatus, thanks to a group of students who organized to bring it back and an instructor who traveled to Ithaca from her home in the Andean highlands of Ecuador.

Quechua is the most widely spoken Indigenous language in the Americas. Yet, because it is primarily an informal, spoken language, it is harder to teach and pass down through generations.

Chango is teaching beginning Elementary Quechua I at Cornell as she pursues graduate studies in pedagogy and linguistics, with support from a Fulbright Foreign Language Teaching Assistant fellowship. The Latin American and Caribbean Studies Program (LACS), part of the Mario Einaudi Center for International Studies, applied to the same grant program to add Quechua instruction to Cornell’s curriculum and is hosting Chango during her year in Ithaca.

In the 1950s, linguistics professor Donald F. Solá (College of Arts and Sciences) introduced Cornellians to the language, but after his retirement, Quechua disappeared as a course offering – until a group of students organized in 2020 to help bring it back.

“Many of us have parents, grandparents and other family who speak Quechua,” said Vanessa Olguín ’22, president of Contigo Perú, a student organization promoting Peruvian culture on campus. “We wanted the opportunity to learn the language at Cornell.”

Contigo Perú built a list of interested students to demonstrate demand for Quechua and support LACS’ grant application. Now Olguín is enrolled in Chango’s class, along with 13 classmates – most with strong personal and academic connections to the language.

A classmate, Anna Whittemore, is a doctoral student in the field of anthropology planning fieldwork in the Andes. Now she is able to study the major language of the Inca empire at Cornell. Whittemore doesn’t mind the course’s 8 a.m. start time: “Everyone wants to be there,” she said.

Chango focuses the class on her Salasaca Indigenous culture, including traditions like Killa Raymi – a festival honoring the moon, seasons and femininity – which the class recently celebrated with a small gift for each student.

She is working with the Language Resource Center (A&S) and Quechua instructors at peer institutions to develop her own course materials, since Quechua resources are not widely available.

On Indigenous Peoples Day, Chango joined LACS at Onondaga Community College, where she shared the Kichwa language and Andean culture. On the Oct. 27 episode of LRC’s podcast, Speaking of Language, she reflected on the impact of teaching Indigenous languages.

“Soledad has brought tremendous energy and enthusiasm to the classroom and community,” said Ernesto Bassi, LACS director and associate professor of history (A&S). “With all her hard work, she is helping LACS build a strong argument for teaching Quechua on a more permanent basis.”

LACS will apply for additional funding next year, Bassi said, to keep Quechua instruction at Cornell.

Cornell offers instruction in 57 languages through A&S, including less commonly taught languages like Urdu and Burmese, with support and expertise from Einaudi Center area studies programs. Cornell students can apply now for a Foreign Language and Area Studies fellowship to become fluent in a language of South or Southeast Asia.

“I hope to strengthen the language in my own culture,” Chango said. When she returns to Ecuador next year, she plans to teach Kichwa to her community members and encourage the language’s development and retention in Ecuador and beyond.

Learn about opportunities to explore Europe at Euro | Fair on Thursday, Nov. 18, 11-2 in Duffield Hall atrium.

Lia Sokol ’23 is a writing intern for Global Cornell.

Read this story in The Cornell Chronicle.

Year-End Gratitude from the LRC 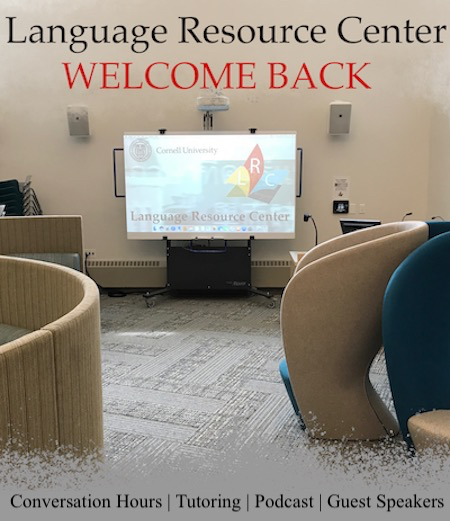